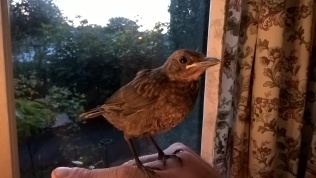 Four weeks ago my neighbour brought round a little chick he had found under a railway bridge. Barely alive he could hardly open his eyes. I fed him two hourly with a syringe and cockatiel mix and by the next day although weak was a bit more awake. I was amazed he survived the night but now plenty of mealworms and four weeks later he is doing very well. I’m not sure he will ever be able to be released into the wild but at least he is alive.

This entry was posted in Wildlife. Bookmark the permalink.